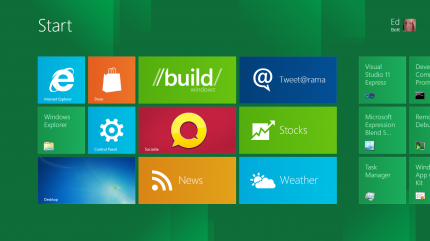 This morning, Microsoft officially took the wraps off of Windows 8, unveiling its radically revised new operating system in front af an audience of software developers.

If you think you know what to expect from Windows 8, just wait till you get your hands on it.

I stayed up far too late last night, experimenting with the developer preview build that Microsoft will show off to the public for the first time today. I wanted to get a good night’s sleep, but I literally couldn’t keep my hands off the sleek Windows 8-powered tablet that I have on loan for the rest of this week.

The new OS has more than its share of rough edges, and the new “modern shell” is disorienting—at least initially. And Windows boss Steven Sinofsky took great pains to stress that this is not a launch but rather the initial availability of the platform for developers. Still, after a few hours of increasingly addictive hands-on experience, I am convinced that this new release will indeed be a very big deal.

Although you can use Windows 8 with a mouse and keyboard, it’s at its best on a touchscreen-equipped tablet like the one I tested. The form factor is thin, but this compact PC is no lightweight; there’s a fully loaded PC under the hood, with an i5 processor, 4 GB of RAM, and a speedy solid-state drive. With a screen resolution of 1366 by 768, it’s capable of playing high-definition videos and meets the minimum spec to arrange two of the new Metro-style apps side-by-side.

The Windows 8 difference is obvious from the moment you boot it up. As part of the setup process, I configured the system to use my Windows Live ID and password as the login, which automatically picked up my picture for the user tile on the Start page. Choosing this configuration also allows you to sync your personalized settings to the cloud so they can roam with you as you switch between devices.